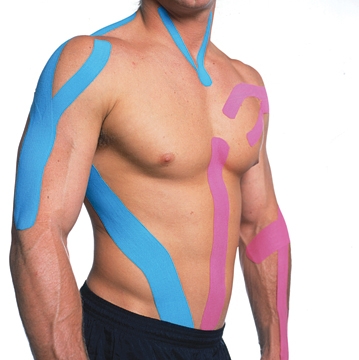 Athletic taping is typically done with a non-elastic tape which will be wrapped around joints to stabilize them and restrict motion.

Kinesio(TM) taping has a much broader range of applications. The tape is 140% the elasticity of human skin. By skillfully applying the tape to specific structures with a particular amount of stretch on the tape different effects can be achieved. Some of these effects include: muscle inhibition, muscle facilitation, increased circulation, increased lymphatic drainage (to reduce swelling), pain relief, functional correction, and increased range of motion.

The effect that there is the most evidence to support is lymphatic drainage. Kinesio(TM) Taping techniques can be used to encourage the reduction of swelling, edema, and bruising. There is also evidence to indicate that it can improve the proprioception in some joints possibly reducing the likelihood of an injury such as an ankle sprain.

Beyond sporting applications, Kinesio(TM) taping is used to treat discomfort associated with pregnancy, infant colic and digestive disorders, and TMJ disorders to name a few conditions.